If you are using the Social Media Widget plugin (social-media-widget), make sure to remove it immediately from your website. We discovered it is being used to inject spam into websites and it has also been removed from the WordPress Plugin repository.

This is a very popular plugin with more than 900,000 downloads. It has the potential to impact a lot of websites. 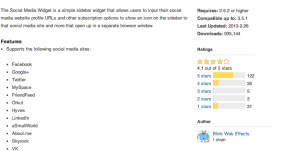 The plugin has a hidden call to this URL: httx://i.aaur.net/i.php, which is used to inject “Pay Day Loan” spam into the web sites running the plugin. This is how it looks like in the browser:

The malicious code was added only 12 days ago when they launched the version 4.0 of the plugin. So we are recommending that everyone removes that plugin immediately until we have more information. Our free SiteCheck scanner does identify if your site has been injected with this type of SPAM.

This is the code that was added to the plugin:

The code itself is very simply. You can see where they are pulling the malicious url on line 471. The rest is just error handling and embedding the injection.

In fact, if you want to try it safely, simply open your friendly terminal and run:

You can clearly see the injection and in return the SPAM being injected. Now in this case you’re only seeing the injection, but once this is embedded in your website it’ll hide itself amongst all your other code, making it all that harder for you as a website owner to find. But exceptionally easy for search engines, like Google to flag.

What is really concerning about this, isn’t even the SPAM injection. That happens all the time, it’s the fact that the malicious payload found it’s way in the core files. It was then uploaded to the WordPress.org Plugin Repository.

You can see what they did by looking at their changes:

It was likely Otto that removed it based on his response in the forums:

We forced an update to remove the discovered malware from already existing sites, however I highly recommend that you find another plugin.

So what does this tell us?

Well we know it’s not a vulnerability in the code, it’s an intentional injection, designed to compromise thousands. Very intelligent, but the question is by who.

First, the attacker is doing this directly to the core of the plugin. So, either it’s the author, or his credentials are compromised. Being that it was injected then modified it’s probably safe to say someone has access and they are not doing very nice things with it.

Second, kudos to the core team on finding and resolving the issue. It does however make you sit back and wonder, is this one isolated incident or is the going to be the new attack vector? If it’s the latter it causes grave concern, again demonstrating that the biggest vulnerability we all suffer is ourselves and our access.