For the last 3 weeks we have been tracking a malware campaign that has been compromising thousands of WordPress sites with the VisitorTracker malware code.

We initially posted some details about this issue on this blog post: WordPress Malware – Active VisitorTracker Campaign, but as the campaign and the malicious code has evolved, we decided provide an update to what is going on.

To give an idea of the size of this campaign, we tracked the number of compromised sites we have detected over the last 3 weeks: 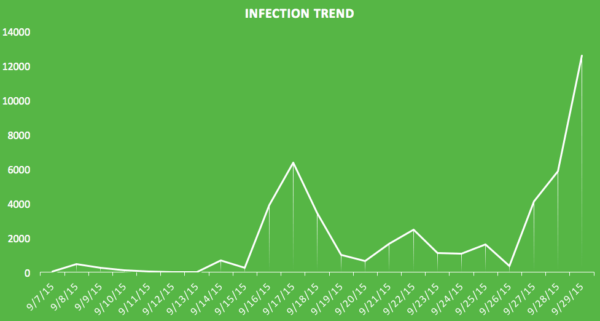 As you can see from the above graph, it started relatively small, peaked about 10 days ago, slowed down again and gained a lot of traction over the last 3 days.

The malicious code started very simple. It would modify the headers and footers of the site and add a javascript to redirect visitors to a Nuclear Exploit Kit landing page. These landing pages tried a wide range of available browser exploits to infect the computers of unsuspecting visitors.

That’s pretty normal and a common technique used by malware authors. This is what the code looked like:

If you know javascript, you can see that it is creating another remote call to load the content from the watch.php file within the compromised site. That file controlled what Nuclear landing page would be used. It was also used to hide the malware from certains IP addresses and users to make it hard to be detected.

The original code was easy to spot and easy to debug, so the latest iteration is a lot more complex. It included multiple layers of encodings and the end result was this piece of code injected to every javascript file on the site:

The PHP code was also modified, but kept using the header/footer files. They added a simple base64 obfuscation that looks like this now:

If you suspect your site has been compromised, these are the new indicators of compromise that you should be looking for.

In addition to the evolution of the malware campaign per se, we spent the last 3 weeks trying to identify how these sites were getting hacked. The more sites we investigated, the more diversity we found in the plugins and themes being used.

We can definitely say that there is no single plugin or theme functioning as the sole victim being exploited in this campaign.

The malware group behind this campaign is actually leveraging a type of WordPress Exploit Kit, where they try a combination of exploits against their targets. Some of the more common vulnerabilities being exploited by this kit includes:

There are also a few more exploits against other less known vulnerabilities. All these vulnerabilities have patches available, but websites are still running susceptible versions leading to these increased compromises.

Another contributing factor is what we categorize as cross-site-contaminations, where a smaller and less important site are being used to compromise other bigger sites within the same server/account. It happens very often on shared environments where a forgotten debug or testing site is left outdated and then used to mass compromise the server.

We detected thousands of sites compromised with this malware within the last 3 weeks and 92+% of them are using WordPress.

If you are a WordPress user, make sure you keep all your plugins updated, including premium ones. I also recommend checking your site via our Free Security / Malware Scanner (SiteCheck) to verify if you’re currently being affected by this campaign. If you’re a system administrator and have access to your server you can use the following command (grep) to search for the infection in your files:

Once identified, we recommend you proceed with removing the infection and looking for any other indicators of compromise. If you need professional response, our team is standing by to assist.