Our security operations team investigate and mitigate multiple denial-of-service (DDoS) attacks every single day. One recent case caught our attention because of the intensity and duration of the attack and – as we discovered through some research – how it was being done. In this article, we’ll share the specifics in an effort to track down the vulnerable devices and to help get them patched.

DDoS Against a Small Business

It all started with a small brick and mortar jewelry shop that signed up with us to help protect their site from a DDoS that had taken them down for days. By switching their DNS to the Sucuri Network, we were able to quickly mitigate the attack for them. It was a layer 7 attack (HTTP Flood) generating close to 35,000 HTTP requests per second (RPS) which was more than their web servers could handle.

Normally, this would be the end of the story. The attack would be mitigated, the attackers would move on after a few hours, and the website owner would be happy. In this case, however, after the site came back up, the attacks increased their intensity, peaking to almost 50,000 HTTP requests per second. It continued for hours, which turned into days.

Since this type of long duration DDoS is not so common, we decided to dive into what the attackers were doing. To our surprise, they were leveraging only IoT (Internet of Things) CCTV devices as the source of their attack botnet.

It is not new that attackers have been using IoT devices to start their DDoS campaigns, however, we have not analyzed one that leveraged only CCTV devices and was still able to generate this quantity of requests for so long.

As we extracted the geolocation from the IP addresses generating the DDoS, we noticed that they were coming from all over the world in different countries and networks. A total of 25,513 unique IP addresses came within a couple of hours.

The source of the attack concentrated in Taiwan, with 24% of the IP addresses, followed by the USA with 12%, Indonesia with 9%, Mexico with 8%, and Malaysia with 6%. The top 10 countries with the most compromised CCTV devices used in this attack were: 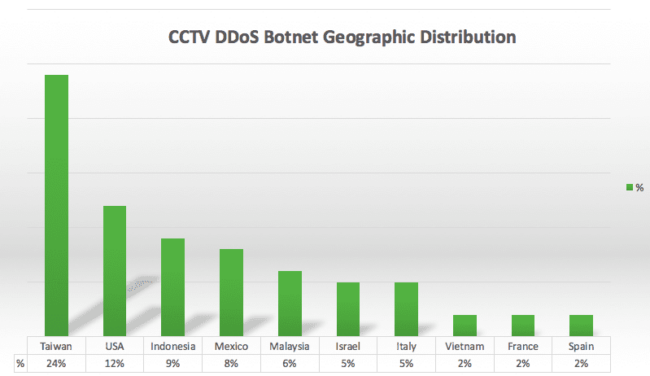 When we look at the networks, the top ASNs matched the countries pretty closely:

We already started to reach out to some ASNs and provide the IP addresses affected. If you manage an ASN, please contact us and we will provide a list of IP addresses compromised within your network.

As far as country visualization, this is the plot of the IP addresses across the world: 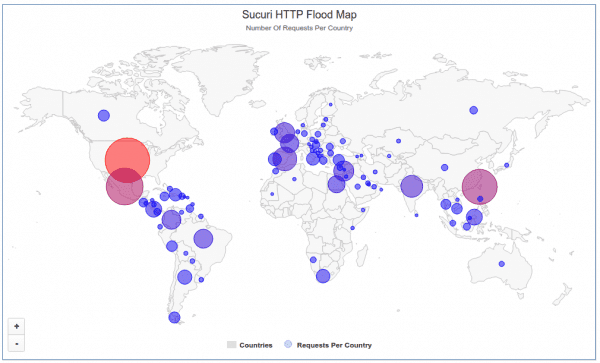 As we dug deeper into each of these IP addresses, we learned that all of them were running the “Cross Web Server” and had a similar default HTTP page with the “DVR Components” title.

This is what raised our suspicions of an IoT botnet that was leveraging some CCTVs as part of the attack. As we kept looking, we found the company logos from the resellers and manufactures on all IP addresses.

These were the companies with the most market share: 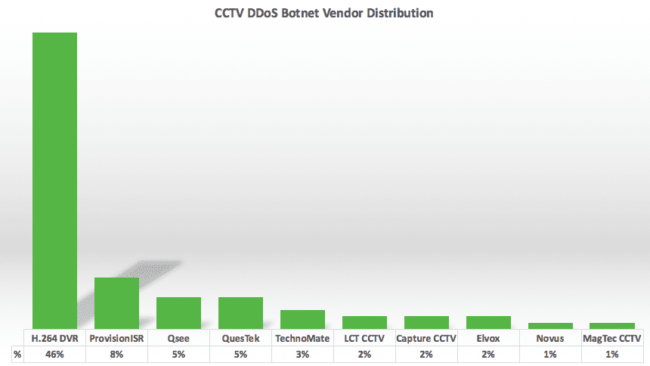 As you can see, the majority had the default H.264 DVR logos, but the others had modified branding to match the company that built or sold it. All these devices are BusyBox based. It seems like they might have been hacked via a recently disclosed RCE vulnerability in CCTV-DVR (this is unconfirmed).

As far as the DDoS attack, it was a variation of the HTTP flood and cache bypass attack, which is pretty standard and mitigated by the Sucuri Firewall. Very few servers can handle 50,000+ requests per second, but due to our Anycast network and stack optimization, that number is easily mitigated by us.

As for the attack indicators, they were leveraging random referrers and user-agent combinations in an effort to emulate normal browser behavior. The most popular referrers were:

The user agents were pretty random as well and emulated the most popular browsers: Chrome, IE, Safari, etc:

We don’t see many DDoS attacks leveraging IPv6 yet, and this is another thing that surprised us as we saw quite a few of these devices coming from IPv6.

It wasn’t a big number, but almost 5% of all DDoS attack IP addresses came via IPv6.

That’s a change we expect to keep happening as IPv6 becomes more popular.

Unfortunately, as website owners, there is not much you can do to get those 25,000+ CCTVs fixed and protected. You also can’t do much to fix the millions of vulnerable devices on the internet that can be used as botnets and DDoS amplification methods.

However, you can do your part. If you are an online camera user or vendor, please make sure it is fully patched and isolated from the internet. Actually, not just your online camera, but any device that has internet access (from DNS resolvers to NTP servers, and so on).

We are in the process of reaching out to the networks that have these unprotected and compromised cameras, but that’s just one small piece of the problem. Once the cameras are patched, the attackers will find other easily hacked devices for their botnets.

If your website continues to go down, or you are experiencing DDoS attacks, I recommend trying the Sucuri Firewall. It is a cloud-based security solution that includes DDoS protection as part of our Intrusion Prevention and WAF stack.