When trying to understand the anatomy of attacks on websites, you have to break it down into manageable parts. In my mind it really comes down to two types: Targeted and Opportunistic.

It is important to understand is how the attack is executed. That’s what I want to spend some time on in this post.

For most, targeted attacks will be rare, even though they happen every day. You might recall mentions on the news about the CIA website being defaced, or LinkedIn and eHarmony being compromised. These are targeted attacks. There are also examples like the most recent article that talked to the Gizmodo employee who appeared to have lost his entire digital identity, simply because the attacker liked his Twitter handle.

On the flip side, you have opportunistic attacks that are the most common. I provide a better discussion on it in our post, Understanding Opportunistic Attacks. The good news though is that in both instances you find many similarities in the attacks, specifically the use of tools that allow for automation.

To help understand automation we’ll make use of a report that was released in July by Imperva. It’s titled Web Application Report, Edition 3 – Released July 2012, and in it they summarize their findings after a six month period in which they randomly selected 50 websites and actively monitored their attacks. Highlights of what they found include:

While a sample group of 50 websites is relatively small and likely not very representative of the close to 800,000,000 websites on the interwebs today, it is useful in understanding what automation means and more importantly, seeing what some of those attacks look for.

When reading their report it’s important to get your baseline as to how their data analysis was conducted and their presentation methodology.

So to help summarize:

With this understanding we are better prepared to digest the data.

Their summary chart is a good place to start when digesting the report:

Here you can see some very good quantifiable data points on what automation really means and what it looks like.

I found this all very fascinating. For me, it gave me a much better idea of what automation looks like. Specifically, how it is employed in today’s attacks.

The shear volume of the attacks in the incident, and attack days, makes it highly impractical to think it is anything but an automated process. With that assumption, taking a look at what the attacks were comprised of was another great addition to the report.

In their analysis they summarized the attacks into 8 categories. Here I’ll focus on the ones I think impact our readers the most.

From that, this was the distribution of those groups in attack incidents within the sample group:

In each case, here is the summarized duration of those same attacks within the sample group:

Again, this does not mean that this is the same distribution you can come to expect, instead it’s meant to better illustrate what automated attacks look like and how they target different vulnerabilities.

The first table shows that within the six month test period (and restricted to their sample group) the median attack incident was 17.50 for SQL injection attacks, so 50% of the incidents were above this and 50% below.

This doesn’t mean that they were successful, just that the attempt was recorded. In that same sample group, the max attack incidents was recorded at 320 for that same category – SQL injection.

The second table then shows you that of all the incidents, the median was 8.39 minutes for SQLi, 7.50 minutes for RFI, 7.83 minutes for LFI, and so on.

The Key is Automation

If you find yourself scratching your head, I do apologize and hope to clarify the discussion in this section.

What the data provides us is insight that helps affirm opinions around how attacks work, specifically the automation of attacks. Because of the sheer volume of attacks today, automation is the only real answer to explain the surge in infections over the past two years.

Automation is key because it offers a number of benefits to the attackers. For instance:

That being said, automated attacks still carry with them similarities:

Often you can expect the scanning and compromise to happen simultaneously, like what you see above. Those attacks were automated scans looking to exploit known vulnerabilities in each of those categories.

Here is a real-world example on my own server in which you can see the attack attempting to (1) identify the vulnerability, TimThumb, and if found (2) exploit it by passing a parameter that then referenced the malicious payload:

In these implementations, while they automate attacks, they are still managed by an individual or group of individuals. That unfortunately is but one component of these attacks.

More sophisticated automation tools are embedded within worms and housed within malware networks (malnets). This was best articulated in Blue Coat’s 2011 Web Security Report, in which they kick off the report by saying:

…malnets (malware networks) emerged as the next evolution in the threat landscape. These infrastructures last beyond any one attack, allowing cybercriminals to quickly adapt to new vulnerabilities and repeatedly launch malware attacks. By exploiting popular places on the Internet, such as search engines, social networking and email, malnets have become very adept at infecting many users with little added investment.

They go on to provide a nice illustration in which they identify the top 5 malnets for the year and more importantly, provide good information on what each malnet is designed to do and how they scale based on when an attack occurs or when it goes into hibernation.

To help grasp the global reach of these malnets, they even provide a nice illustration showing how each malnet is geographically dispersed: 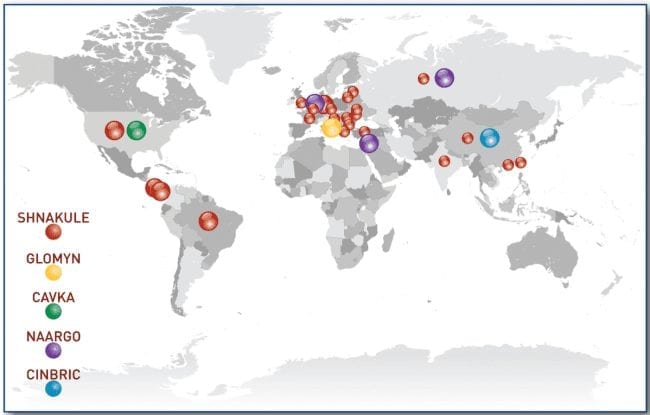 Yes, all this can be a bit overwhelming, to myself included, but the fact remains that the interwebs is a dangerous place. Attacks today have nothing to do with you as an individual in most cases, and rarely are targeted – using rarely loosely when you think about the 800 million websites – it’s about maximum impact and monetization, or financial gain.

So the question needs to change from, “Why me?” and “It’d never happen to me!” to “How do I become better prepared and informed about today’s threats on the web?”